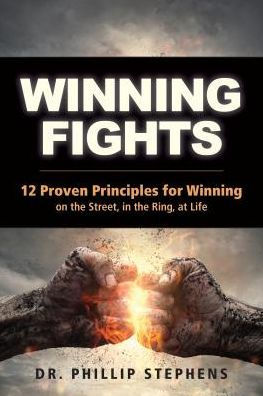 Winning Fights: 12 Proven Principles for Winning on the Street, in the Ring, at Life

Winning Fights focuses on 2,500 years of proven fighting principles originating from Eastern concepts and proceeding to the modern era.

This book is for pugilists seeking an edge in competition as well as soldiers and law enforcement officers facing conflict. Like The Art of War and The Book of Five Rings, however, many of its lessons also apply to the world of business and negotiation.

The majority of martial art books are dedicated to technique. They feature photos and descriptions of strikes, blocks, evasions, and submissions. While many of these titles are important and influential, it is clear that if our martial study is simply about acquiring new tactics, we risk leaving a void in our training―and possibly in our own character.

Dr. Phillip Stephens conducted extensive research in developing this work. He drew from his years of martial training and his experience as a member of the North Carolina Boxing Commission. He even reached out to combat personnel at Fort Bragg, North Carolina, who offered additional insight on what it takes to prepare for combat―and to prevail.

This book features:
Twelve principles for winning fights
A survey of Eastern and Western traditions
An intelligent yet accessible discussion of these concepts

With this book you will
Learn to see beyond fighting tactics, which change, to fighting principles, which endure
See your training in powerful new ways

“Winning fights is based on principles, not techniques,” Dr. Stephens writes. “Technique is important, but techniques change, adapt, and evolve. Principles are timeless.”

Kirkus Reviews describes it as:

“A handbook about handling conflict from both a physical and philosophical perspective.

“‘Finding any semblance of common ground, accepting what comes and dealing with it calmly and dispassionately requires quite a bit of discipline,’ Stephens writes in his nonfiction debut, which ‘comes from contentment with oneself first.’ A strong flavor of Eastern martial culture, reflected in this quote, runs throughout the book, which refers often to such legendary military philosophers as Sun Tzu and the swordsman Miyamoto Musashi (1584–1645), author of The Book of Five Rings.

But although Stephens spends time talking about spiritual power and mindfulness, the book is predominantly concerned with managing physical violence, either in controlled circumstances, such as a martial arts dojo, or in the chaos of the street.

Overall, he’s an excellent guide to the realities of such conflict, presenting his principles in clear, sharp prose. Readers who deal regularly with physical altercations—such as war veterans or school guidance counselors—will particularly find a great deal of value in these pages.

While outlining twelve crucial elements for securing any kind of victory, Stephens effectively emphasizes core concepts, rather than specific tactics: ‘Sure, specialized skill and technique is important,’ he writes. ‘But it is foundational principles that win any fight regardless of scale or context.’

He peppers his text with anecdotes and the examples of a wide array of famous fighters throughout history, from famed actor and martial artist Bruce Lee to Brazilian-jiujitsu fighter Royce Gracie, who was known for ‘almost always beating much larger opponents.’ Stephens also regularly broadens the backdrop of his study to include large-scale military conflicts, always to illustrate points about the necessity of clear thinking in any kind of fight, and about the economical use of force.

“A clear and strongly worded fighting manual in the long tradition of Sun Tzu.”
—Kirkus Reviews


What are experts saying about it?

“Whether it is for sport or self-preservation, Winning Fights breaks down the principles every fighter should learn, understand, and utilize.” Kevin MacDonald, MMA referee; officials trainer for ABC MMA; Association of Boxing and Combative Sports Commission (ABC); referee for international UFC and Bellator major promotions

“Dr. Stephens’s book outlines some key concepts that would serve as a good base of educating oneself to the path of not just becoming a warrior but a warrior of wisdom.”
—Doug Marcaida, Marcaida Kali; edge impact weapons specialist; judge, the History Channel’s Forged in Fire